Get TitleBlock from Sheet Views.

How to Get Title Blocks from View Sheet with Revit API❓

There are multiple ways of getting TitleBlocks from Sheets:

I would recommend using a function with ElemnetParameterFilter, since it's already written for you and it's a no-brainer.

This is much easier approach but it will cost in execution time!

I was curious about the difference between these two methods, so I put them to the test. I wanted to see if there was a significant performance loss when using FilteredElementCollector instead of View.Id.
I used a Revit project that is ~500mb and I used similar logic of getting title blocks,

👇 Here are the results. 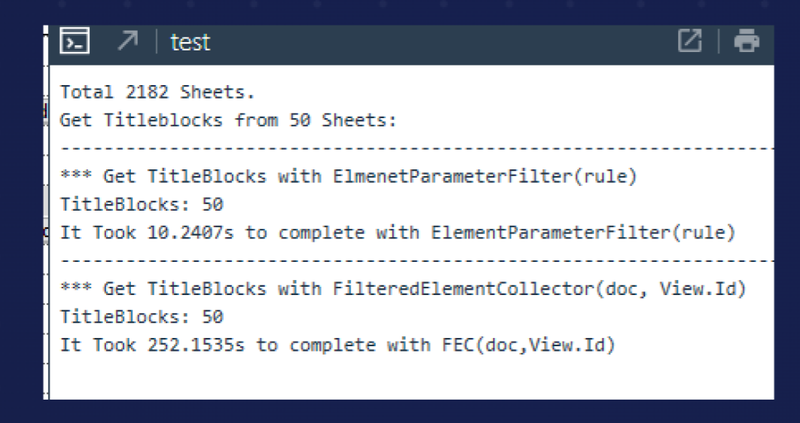 On large projects where it takes longer times to render views, it might become an issue.

The problem is that whenever you provide View.Id to FilteredElementCollector it has to partially render the view. While on a smaller projects this difference can be little, on large projects it might become an issue.

I was too lazy to make separate buttons for each method—so my comparison isn't perfect—but with such a huge difference, who cares?

You can take a look at the code below that I quickly wrote if you want more details!

Get notified when Revit API Course is coming. Best Deal Guaranteed!
Meanwhile, you will be receiving Newsletter with useful Tips & Tricks for Revit API

🙌 Thank You!
Confirm Your Email.

Really glad that you decided to join my newsletter!
Check your inbox, you should receive a confirmation email to be added to the list.

📅 I usually send out my emails on Sundays, see you then👋

Architects and Engineers have already joined!